Yes I can read the letters on the blackboard 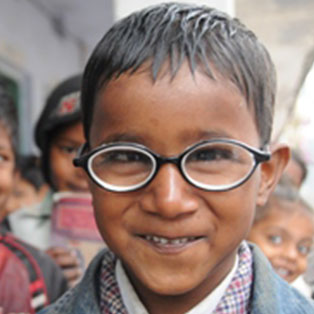 “Yes, I can read the letters on the blackboard!”

Five-year-old Nirmal lives in a village about 40 km from Biratnagar, a major city in eastern Nepal. Nirmal’s father Shrawan (34) works as a daily wage labourer in a factory in Biratnagar and earns about 9,000 rupees per month (= 70 Euro approx.). The family, comprising of six members, lives in a small hut built on one of their relatives’ land. They do not own any land themselves.

Life was normal for little Nirmal: a year ago he started going to a government run pre-school near his house, and enjoyed learning the alphabets and playing with his friends. However, three months ago, Nirmal was playing cricket with his friends at school when he accidentally got hurt in his right eye with a soft cricket ball. The pain was so severe that the boy could not open his right eye properly for a few days. His grandmother took him to a health post nearby and got some eye drops. Later, although the pain in the eye reduced, the vision in his right eye deteriorated considerably. And, over time, Nirmal experienced decreased vision in his left eye, too. As a result, the little boy has difficulty seeing objects at a distance from his eyes; of all, he cannot read the letters on the blackboard as before.

“I cannot read the letters on the blackboard properly,” says Nirmal with a frown. “Also, my friends don’t play with me anymore and they often make fun of me. They call me ‘blind’ and laugh at me…” complains Nirmal, who is accompanied by his mother or grandmother to school.

“Nirmal used to be very bright and active until the incident when he got hurt in his right eye. Earlier, he could see things clearly. Now, he often brings things close to his eyes to see them properly,” says grandmother Beni Devi (54), who works as a domestic help in the village. “I feel very bad for the little boy. He has become very quiet. Often he comes home crying as his friends bully him and do not allow him to play with them… Now, he only has his younger brother Kanhaiya to play with,” adds the grandmother. “I wish we could do something about his eye but we hardly have any money to go the city or an eye hospital,” the grandmother admits.

Luckily, the CBR team of Biratnagar Eye Hospital (BEH), a CBM partner, planned to organise an eye screening camp at Nirmal’s school, Shree Nichamari Primary School, in Rangeli village. “We conduct such school eye screening camps regularly, to identify children with vision problems in the area,” says Kiran Yadav (33), CBR field supervisor. The CBR program – also supported by CBM – aims at early detection, early intervention and prevention of curable eye diseases through health education and referral of eye patients to BEH for medical treatment. The program that started in May 2013 currently covers 14 village clusters in Morang district, in eastern Nepal. “Since we started the CBR program, we have conducted 19 eye screening camps in this area, of which 6 were conducted in primary schools in rural villages. While eye conditions such as refractive error and conjunctivitis are common among children here, cataract and trachoma are comparatively rare,” adds the CBR field supervisor.

“I am so happy Nirmal could finally get his eyes checked…” says grandmother Beni, as Nirmal performs the eye chart test, one eye at a time. Following, CBR worker Kiran writes the boy’s score on a piece of yellow paper and sends him into a classroom where a lot of pupils are sitting on a wooden bench and waiting for their turn – for further examination of their eyes. As Nirmal waits for his turn, he squints his eyes to see how a young man uses a portable instrument to look into the eyes of his clients. “From what it looks like, the boy has corneal opacity in his right eye and this might have resulted in the low vision in both his eyes,” says ophthalmic assistant Bhakta Singh (26), as he examines Nirmal’s eyes using a direct ophthalmoscope.

A couple of hours after the school screening camp, grandmother Beni and Nirmal are at the BEH in Biratnagar, along with CBR worker Sunil Kumar Sardar (21). “While we refer children with refractive error to the nearest primary eye care centre, clients with more serious conditions such as corneal opacity and cataract are brought directly to the eye hospital,” explains the CBR worker Sunil, as he guides Nirmal into the low vision department at BEH.

Following a series of vision tests, Nirmal is found to have mild corneal opacity in his eyes – a condition in which the cornea (the transparent layer forming the front of the eye) becomes cloudy or opaque due to an injury or infection. “Nirmal has corneal opacity in both his eyes. It might be due to the injury to his right eye and later affected the left eye, too. Further, he also has hypermetropia in both his eyes, a common vision problem in which a person has difficulty focusing on near objects,” explains optometrist Pabita Dhungel (22). “It’s good that we identified him early enough, else there were chances the vision in his eyes could have deteriorated even more,” the optometrist adds. “For now, the best solution for the boy would be to give him a pair of glasses – of power +8D. The glasses are provided at a subsidised price by CBM, for children from disadvantaged families. A month later, we will call him for a follow-up and see if he requires a surgery to get rid of the corneal opacity,” Pabita adds further.

Following, as it will take some time for the glasses to be ready, CBR worker Sunil requests grandmother Beni and Nirmal to leave for their village. 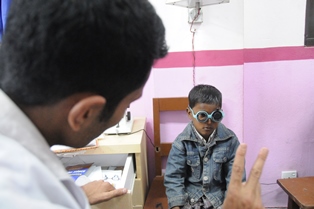 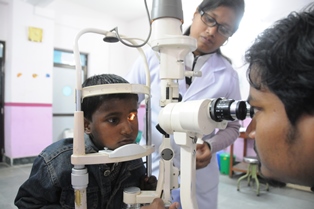 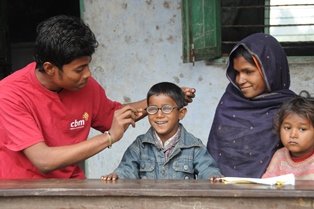 The next day, CBR worker Sunil Sardar has a special gift for his client. Little Nirmal smiles as he reaches his school along with mother Ranu Devi (28), and sees Sunil standing at the school gate. Then, as Sunil helps Nirmal wear a new pair of glasses, the latter cracks a bright smile and exclaims: “I can see everything… I can see everything so clear.” After some time, Nirmal is seen reading aloud the letters on an alphabet chart and dancing with his classmates. “I have never seen Nirmal so happy… He seems to be on top of the world today,” says Sanju Sah, Nirmal’s class teacher at the pre-school. “Thanks to BEH and its CBR team for conducting an eye camp in our school. And for helping children like Nirmal live a better life,” adds the teacher, giving a warm smile to Sunil.

A little later, Sunil sits with mother Ranu and explains that he will visit Nirmal’s school and follow-up on the boy’s progress every ten days. “A month later, we will take Nirmal to the BEH again, to get his eyes checked and find out if he still needs a surgery to remove the corneal opacity,” adds the CBR worker. Mother Ranu, too, beams all over her face and remarks: “It’s nice to see Nirmal smiling again. I don’t know how to thank you enough for all your efforts to improve Nirmal’s eyesight. It really means a lot to us…” All the while, little Nirmal sits next to his mother and wears a cheerful smile. Then, as Sunil asks the boy what he wants to become in future, he replies, “I want to become a police officer.” And why? The five-year-old adds promptly: “So that I can beat all those who used to tease and bully me…” 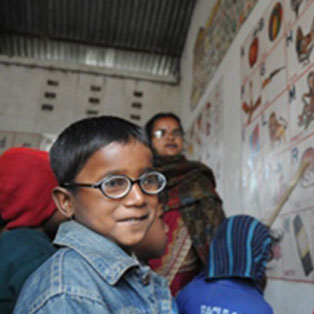 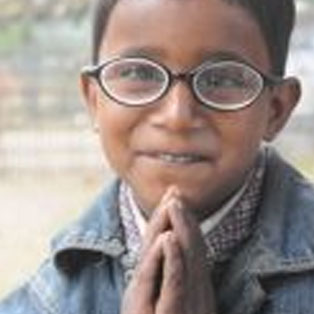